“Do not dig at the site of the old ditch"

A statement that excited the current resident when he heard it. A search in the archives and in the history of the village followed. It turns out that quite a few WWII events took place there. It is a kind of village secret, but the current resident is researching in the archives and in the village for the history of the execution of a couple, a wrong couple. 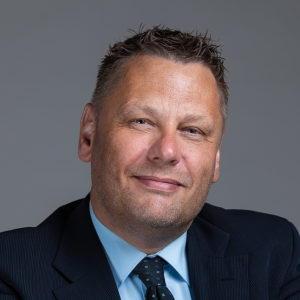 Data from the last century

This is one of the investigations within a documentary about the post-WWII persecution of Dutch citizens for aiding the enemy. In 2025, the historical judicial archive CABR (Centraal Archief Bijzonder Rechtspleging) will be made publicly available, also digitally. An archive of 3.5 kilometres of files with 360,000 suspects. Lex Runderkamp, a reporter for NOS, was given access by the National Archive to make a series about what that archive represents, so that every Dutch person will know what it stands for in 2025. With the help of geo, we make the past come to life.

In March 1945, almost 76 years ago, this execution took place. The woman was supposedly buried on his property, on the site of the old ditch. Now this place is only known from tradition. Now, 76 years later, the question arises: is it possible to find the location of the old ditch?

During WWII, the Royal Air Force (RAF) captured images of the Netherlands from the air. Images that were used for intelligence purposes, to determine approach routes or to determine the effect of a bombing. From this huge image archive, a number of recordings of the desired area are available. I have used the recordings from 1944 and 1945. We are “lucky” that the recordings were made exactly in the period that the execution took place.

The past in the present

However, these images do not (yet) have any coordinates. So, the first step we have to take is to georeference these images. Georeferencing is the positioning of images by assigning world coordinates. In ERDAS IMAGINE this can easily be done with AutoSync workstation. We take the historical image and a recent aerial photograph and mark the corresponding points in both images. For example, the corner points of houses that appear in both images. 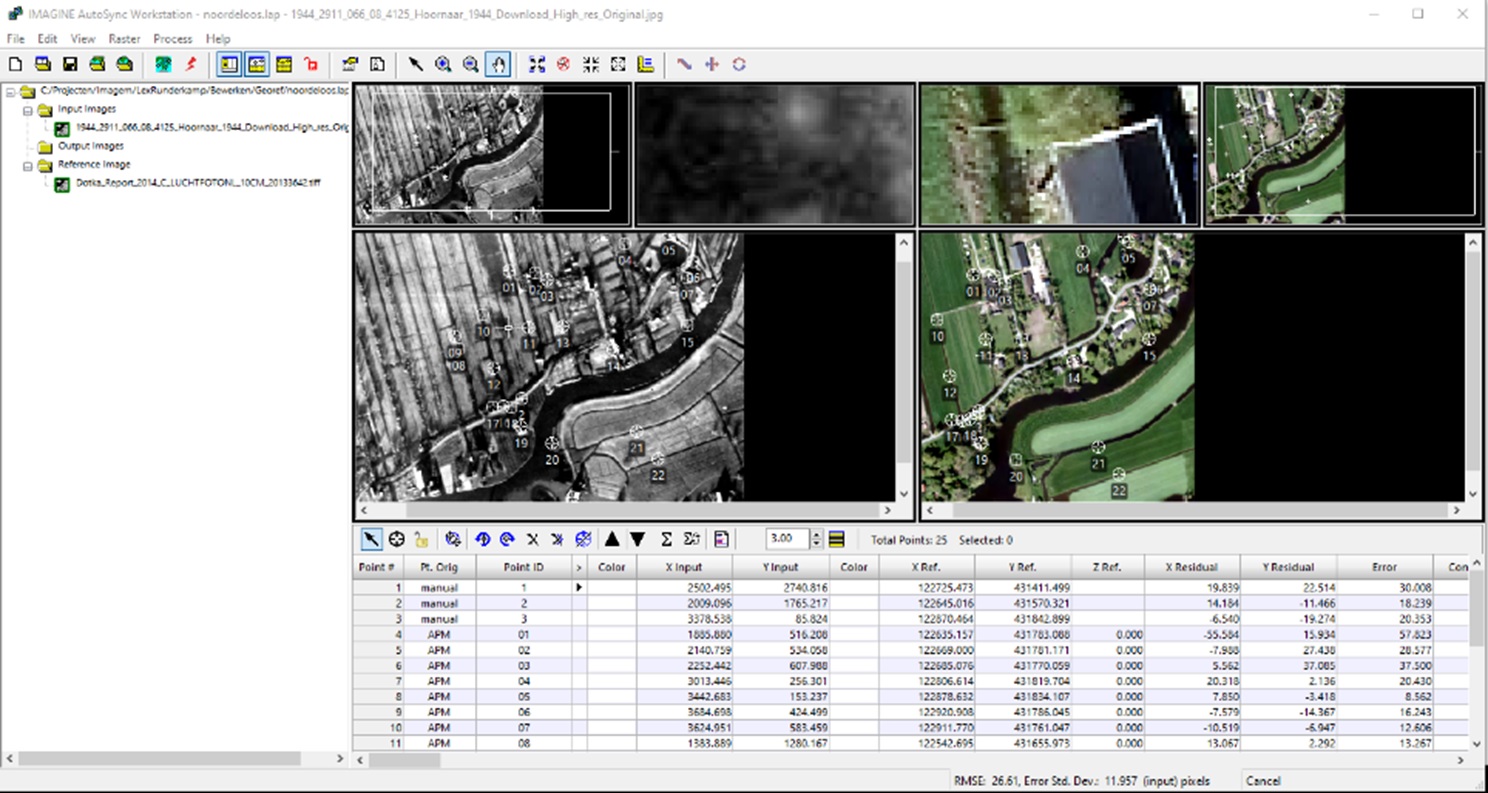 Using the BGT base registration

Nowadays, The Netherlands has an enormous amount of data available: visual material, height files and basic registrations, which we can use to bring the past to life. First we take the Basisregistratie Grootschalige Topografie or Large-Scale Topography Key Register (BGT) and overlay it on the historical image of November 1944.

The BGT is a digital map of the Netherlands on which buildings, roads, watercourses, terrains and railways are unequivocally recorded. The map is accurate up to 20 centimetres and contains many details, as you can see in reality. Think of trees, roads and buildings. In short: the layout of the physical environment. 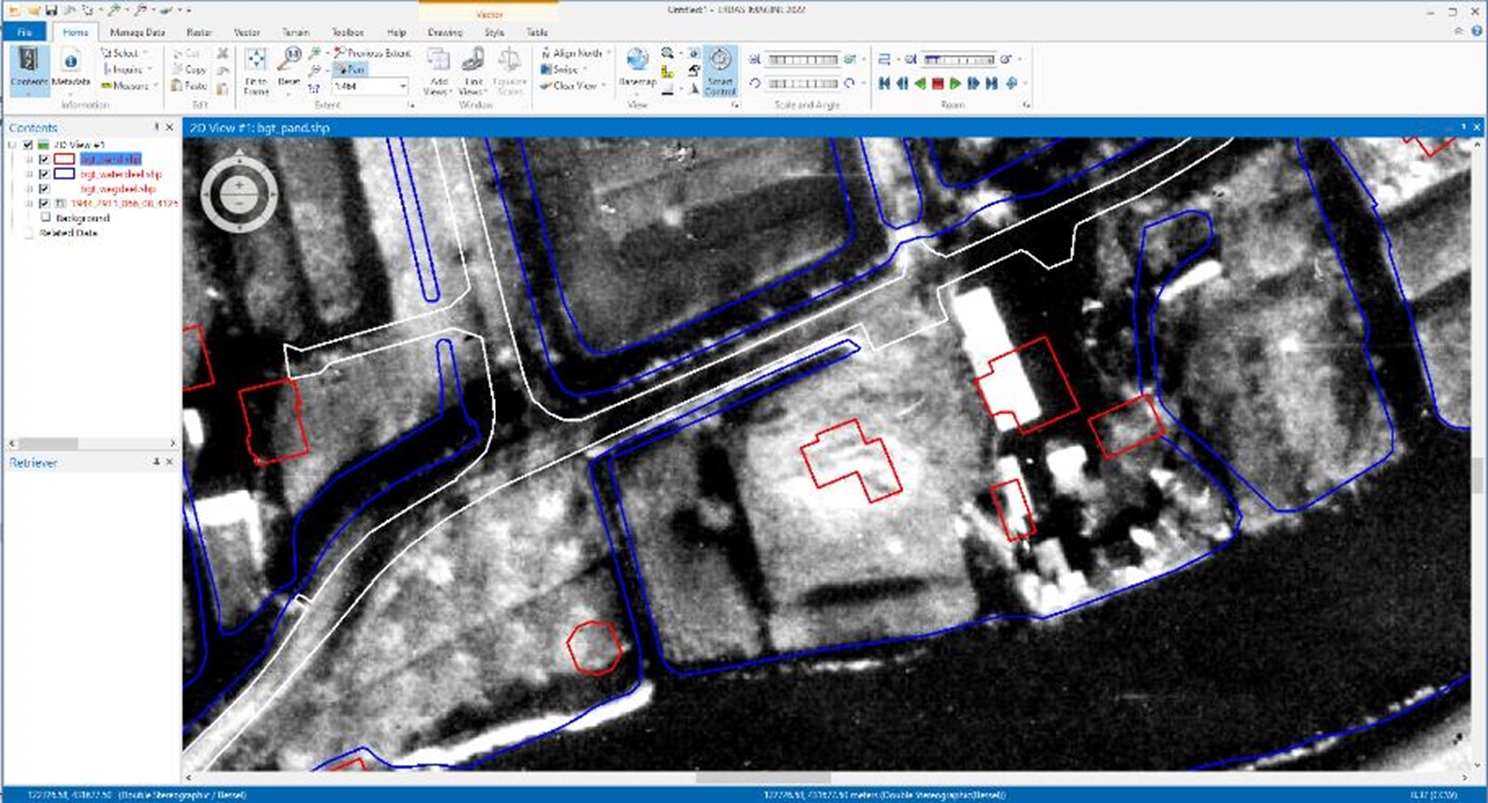 Differences in the course of roads and ditches from then (on the image) and now (the BGT) are immediately visible. Now that the image from 1944 is correct, the ditches from 1944 can be digitised. 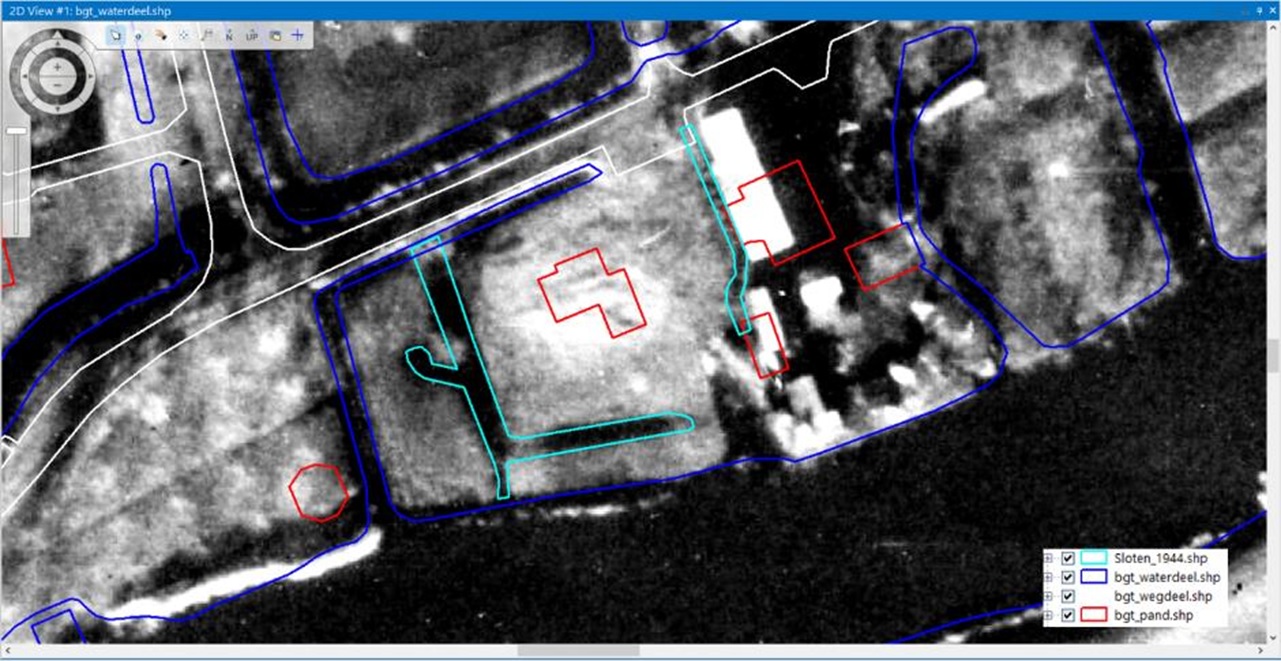 We can then also georeference the images from 1945 and combine them with the data. In the images below, we see that the ditches in March and April 1945 are less visible or not visible at all compared to the image from November 1944. The ditches seem to have disappeared.

To be sure, we look at the temperature of the dates, it may be that the ditches were frozen and thus give a distorted picture. It cannot have been plant growth at that time of year. Using statistics on the weather, we can look up the temperatures of those days:

At all times of the recordings, the temperature was well above freezing, so the ditches were not frozen. Perhaps groundwork was already being carried out on the site in 1945 and this may have been the reason for burying the body here? After all, it would not have stood out among the groundwork.

We now have confirmation that there were indeed ditches on the site. Because we have several images from that period, we can also see that changes that took place on the site around the time the corpse was buried. We can now superimpose the ditches from 1944 (which we have digitised) on today’s aerial photograph. We combine these with the roads (white), buildings (red) and surface water (blue) from the BGT.

We can see that the 1944 ditch on the right-hand side of the plot is now partly under the driveway of the current building. There are now trees in the middle of the site, and only the location of the ditch, which was parallel to the watercourse, is still in open terrain.

To see if the ditch can still be made visible we are going to use the Actueel Hoogtebestand Nederland (AHN), which is the digital height map for the whole of the Netherlands. It contains detailed and precise height data with an average of eight height measurements per square metre. In this way, archaeologists have used small differences in height in meadows to track down old settlements that were not noticeable to the naked eye.

Nowadays, a house was built on the site after 1945, this house has been replaced by the current building in recent years. During this renovation, an artefact from the Second World War was found in the attic. This was the reason for further research, which eventually led to the statement “Do not dig on the site of the old ditch”. 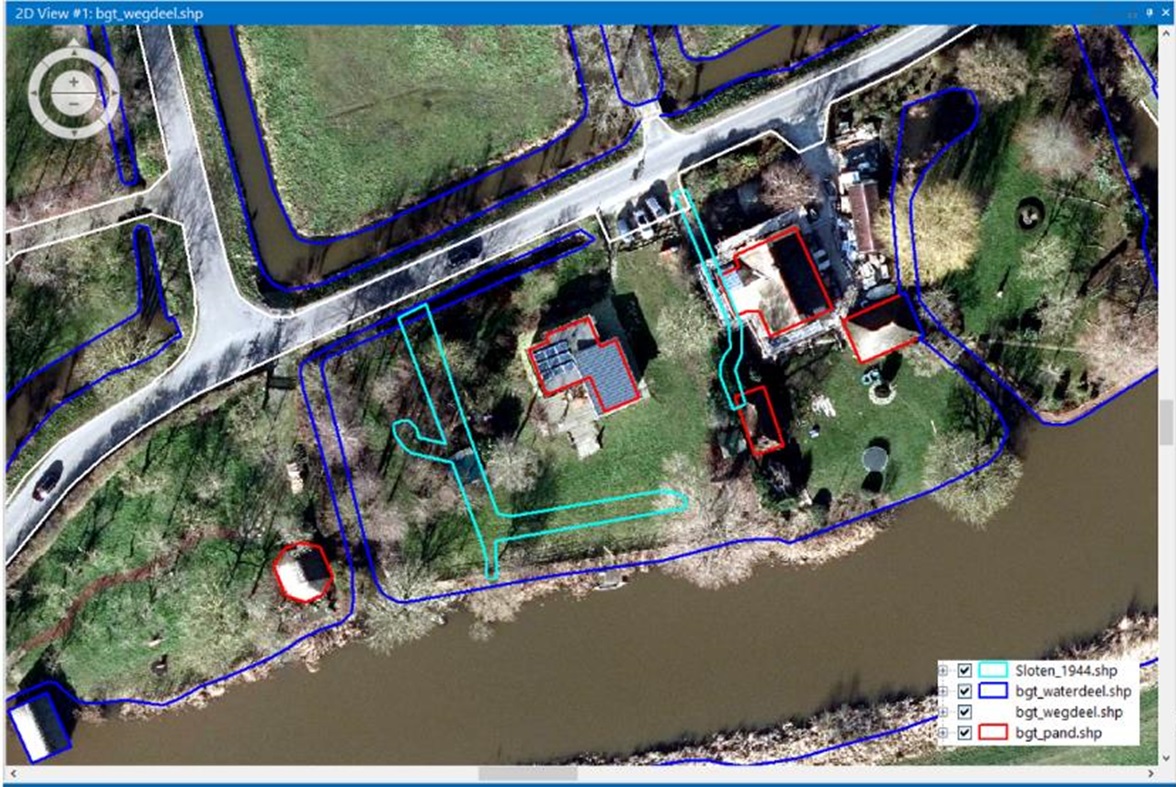 The datasets of the AHN1, AHN2, AHN3 and AHN4 are available as Open Data. This means that the data can be used by everyone for free and without restrictions. Both the raster data and the point clouds are downloadable through PDOK and the National Georegister.

I have used the AHN2 (2011), AHN3 (2015) and AHN4 (2021) to visualise the height differences in the terrain. The AHN1 is unfortunately less suitable (due to lower point density) for looking at the detail level of a plot.

Point clouds are nice datasets to work with, they show the world in 3D in a quick and easy way. Even minimal height differences in the terrain can be visualised well.

The Balloërveld field in Drenthe is a good example of this, although the field has never been reclaimed. By calculating the relief, we gain insight into the terrain. From burial mounds from prehistoric times to a German tank ditch (Frieslandriegel) from the Second World War are still visible today. 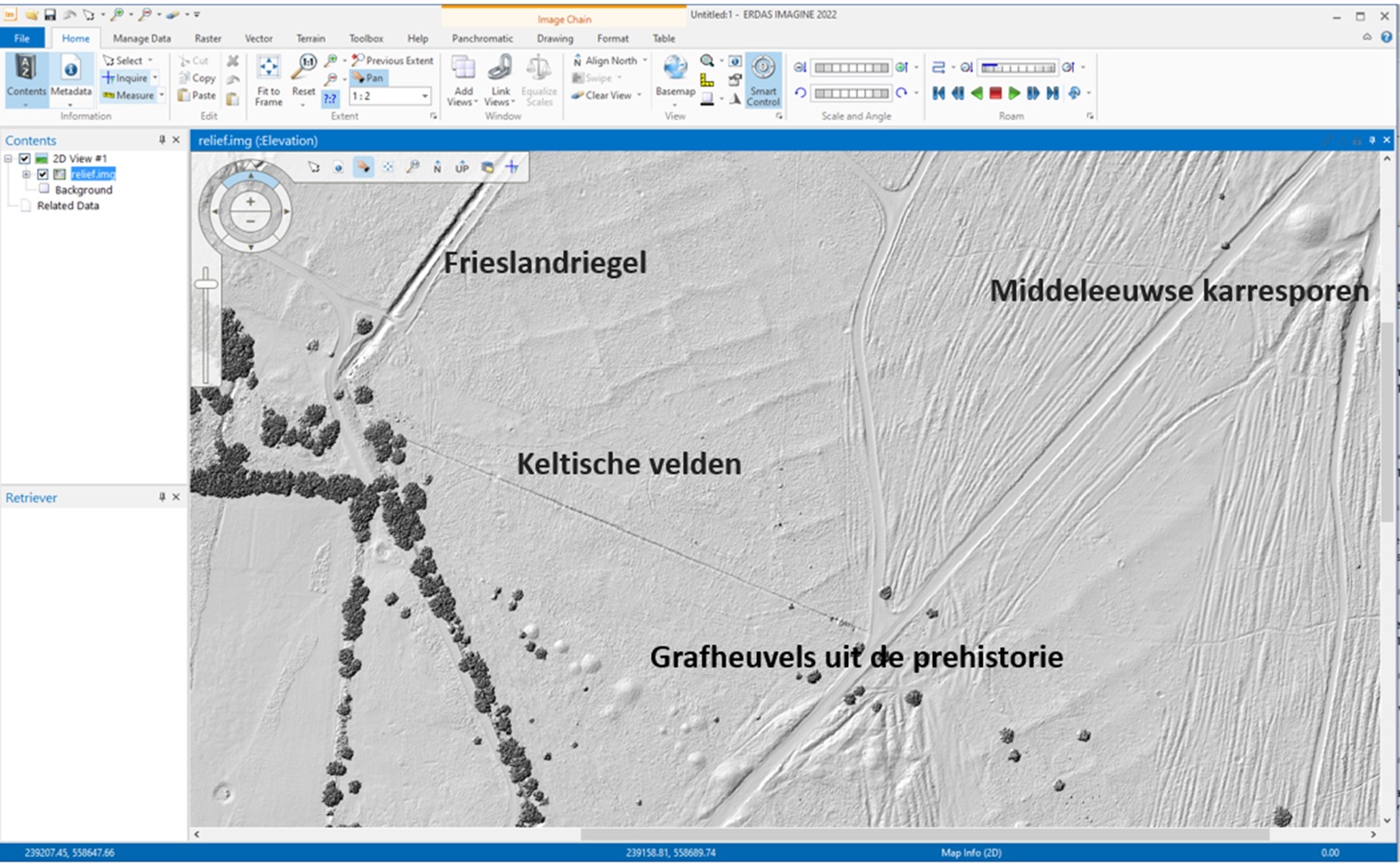 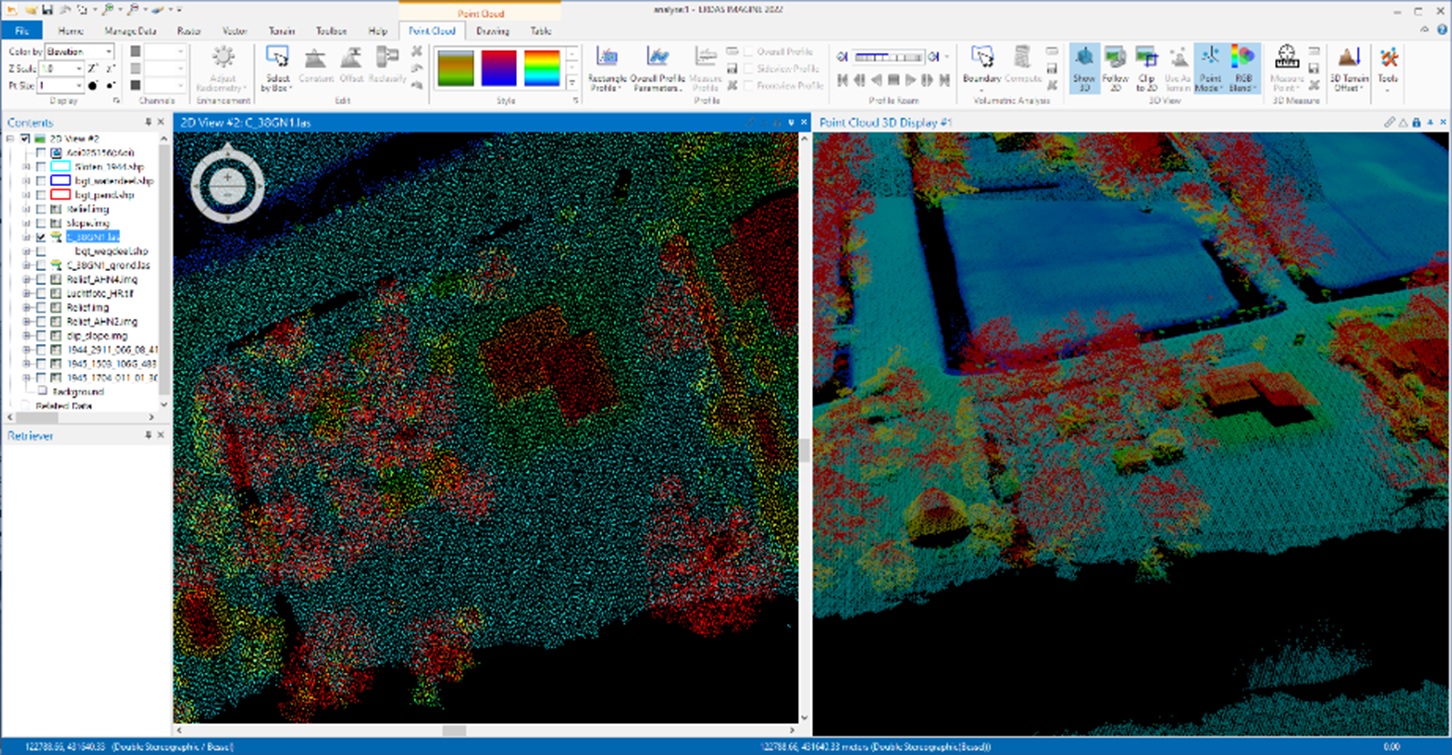 The first analysis is to make a cross-section. By drawing a line across the plot, a cross-section of the terrain is made. I did this analysis on the AHN3. The reason for this is the rebuilding that has taken place in the period after the recording of the AHN3. The soil has been stirred up again in the process.

The cross-section does show minimal height differences. The ditch that ran parallel to the watercourse (and therefore perpendicular to the cross-section) cannot be recognised in the profile.

By using the pointcloud tooling in ERDAS IMAGINE, the model below is quickly created. From the pointcloud, I select only the laser points of the location that represent soil, these are all points that are classified with value 2. Next, the following maps were made:

Surface: the ditch pattern from 1944 corresponds to the lower parts of the terrain.

Slope: The present ditch edge, red lines, is easily recognisable, the ditch pattern from 1944 is not clearly visible.

Relief: The ditch pattern from 1944 can be recognised as slight undulations in the relief.

Clearly visible are the depressions in the terrain that can be seen in the surface and the relief. These correspond to the ditches from the years 33 – 45, which also explains the current damp spots in the terrain (the spots where the water will stand first), according to the resident.

In concrete terms, by georeferencing the aerial photos from the period 1994-1945 and then combining them with current data such as the BGT and AHN, we can make the ditches from back then visible again. 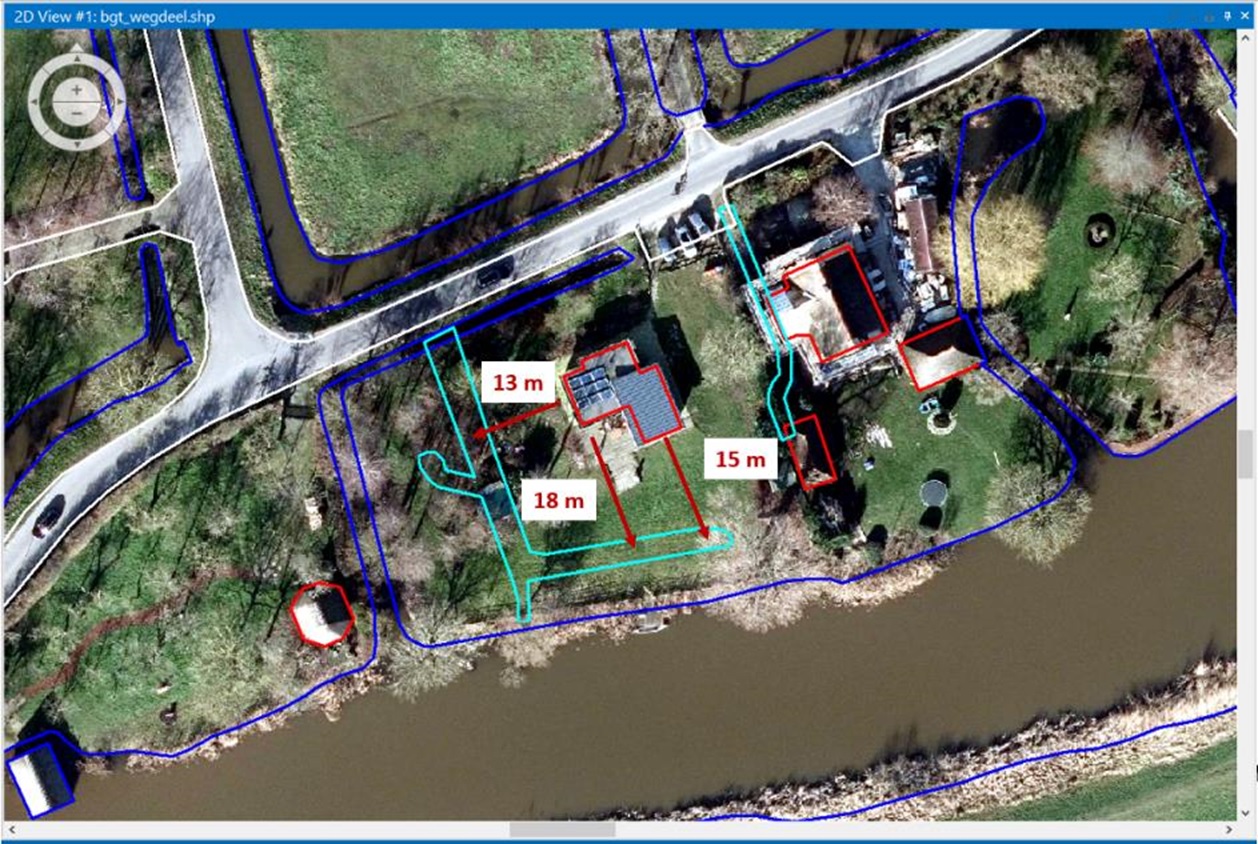 Is it now possible to find the location of the possible corpse? That is a challenging task. With ground radar, it is possible to detect changes in the soil. Unfortunately, the body was not buried in a burial pit, but in a ditch that was subsequently filled in, presumably with all kinds of materials. This makes it impossible to distinguish reflections from bones (if they are visible at all) from other materials such as rubble, tree roots, clay lumps, etc.

The only option is probably to stake out, excavate and sift the soil, whereby part of the old ditch lies under the driveway of the adjacent plot. The other part runs where there are now trees. It’s a challenge to dig there with all the roots one will encounter.

We may have found the old ditches in the terrain, but whether a body or bodies are actually buried there will probably remain a mystery.